I have ridden for as long as I can remember, before I could walk as my dad would say. I grew up on a farm and we had a 12.2 skewbald pony called sausage, which I had to share with my siblings. I was too small to tack up so I would put on the head collar, climb on the poor pony's neck while he was eating the grass, he would oblige by putting his head up and I would scramble on to his back and trot about bareback around the paddock. Thankfully over time I learnt to mount properly! I started out show jumping and then at the age of 13 we rescued a 14.2 pony from a stables in Bermondsey, my dad swapped 50 bales of hay for him!! He was unbroken and a nervous wreck, this started my passion for breaking and producing all my horses. I competed this pony at county level in Working Hunter Pony classes, winning and qualifying for all the major championships. Showing became my passion for quite a few years, competing in Hunter classes. That was until I was given a quirky 16.2 grey Danish horse to break in and ride. He had these big floaty paces which I didn't have a hope of sitting to and the only answer was to have some 'proper' lessons. I started training with Sue McMahon list 1 BD Judge and with her help we competed our way up through the levels to PSG level, qualifying for numerous regional and national championships. My passion for dressage and the correct training of horses had began.

I currently have 2 home produced horses out competing. Mona a 16.2 Irish sports horse is just upgrading to Advanced Medium level and Djohn 16.0 KWPN is just starting his career at Novice level. 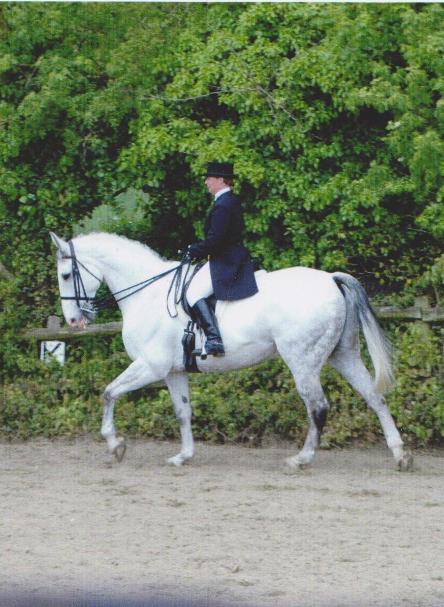